With uncertainty and confusion about the future, we can all agree, GOOD news is needed. This page was developed to showcase GOOD news stories from our citizens, shining light on the good things during this dark time.

How about this for some GOOD News? Brenda Hayes has been making masks for free for anyone in her Goodlettsville neighborhood of Indian Hills, friends, family, and the Brookkdale Assisted Living facility. She put them on her front porch in a basket for people to stop by and pick one or more out at no charge. Her daughter nominated her to showcase how her mom, Brenda Hayes, is being the GOOD in Goodlettsville.

This resident did not know Harper but this note made her heart melt. After looking at the return address on the envelope and realizing Harper lives a few doors down, she wrote a note back and took it down to meet this friendly neighbor. What she found was a precious 8-year old girl riding her bike with no idea how significant the wonderful impact of this handwritten note made during such a heavy time. When speaking with Harper’s father, the resident learned Harper took the initiative to write the notes all on her own. Her parents simply helped deliver them. A couple of days later, Harper mailed 17 notes out to her classmates and friends as encouragement to get through this crisis.

When the resident checked with others on her street, she learned many of the neighbors received a friendly neighbor note from Harper. “She’s a ray of sunshine and Hallmark should let her start a ‘Friendly Neighbor Note’ line of greeting cards!” said the Indian Hills Resident who shared the story.
In this time of uncertainty in the world, the one thing that is certain is that we have it #GoodInGoodlettsville. 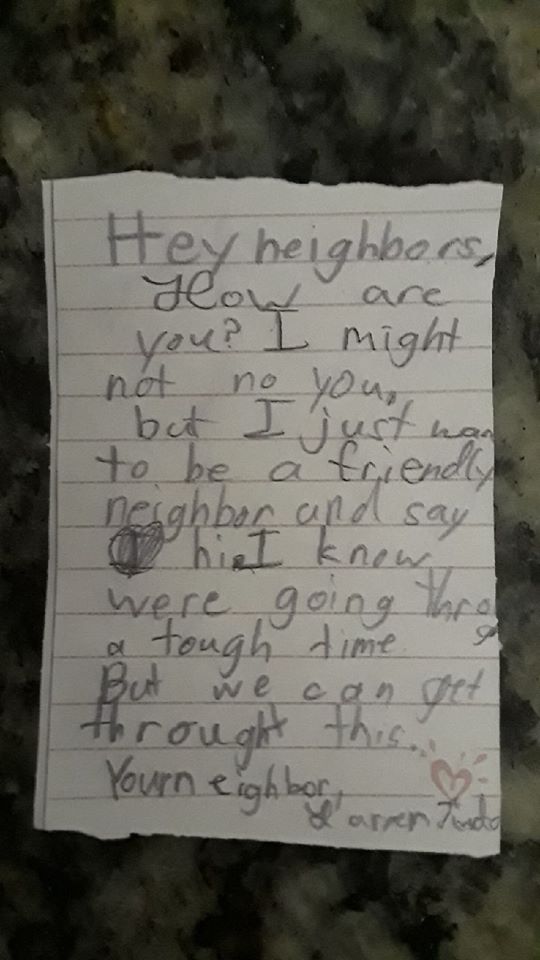